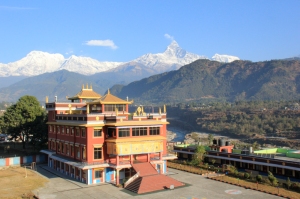 It’s 6am when the deep sound of the gong starts reverberating through the morning stillness. The winter sun is still hiding behind the mountains. Through the darkness, 20 young men in their burgundy dresses slowly brave the crisp air and reach the temple for the morning puja. It’s daily life at Pema Ts’al Sakya Monastic Institute.

The monastery is set among the mysterious and majestic Nepalese Himalayas, 30 minutes north east of popular Pokhara and a dream away from the adventurers’ heaven: the Annapurna region.

Founded in 1999, Pema Ts’al is home to over 80 students between the ages of four and 27.  Many of them come from the inaccessible and impoverished Himalayan region of Mustang, some from politically sensitive Tibet and others from Nepali Buddhist communities. They’ve come here – many following a parental decision – to receive school and college education and honour their family.

I found my way to Pema Ts’al in December 2012 as a volunteer teacher. As my driver got closer to the monastery, I pinched myself to make sure I wasn’t dreaming. The brochure didn’t lie. “Pema Ts’al is truly a jewel in the rough; shining brightly in contrast to the hardships of the region.”

The traditional Tibetan Buddhism colours of red, yellow, white, blue and green were splashed generously across the four buildings (monastery, temple, dorms, butter lamp offering house), bringing so much richness and life to an otherwise stale reality. With Sarangkot hilltop on one side, the famous Fishtail peak on the other, and icy blue rivers serpentined through the valley, there was no mistake to be made: I had reached a very special place in the world. 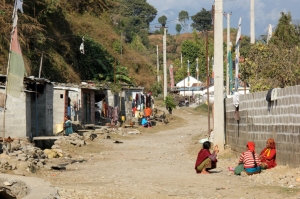 Before teaching my morning class, I ventured with another volunteer to the neighbouring village, Tashi Palkhel Tibetan refugee settlement. The little, cold, concrete houses were in such contrast with the smiling faces and warm ‘Tashi Delek’ locals would gift us with. We stopped by the settlement’s monastery for a visit and a chat with a monk, then walked past the ‘shopping mall’, a small path with a dozen merchants selling jewellery, Tibetan calendars and praying wheels for visiting tourists. Towards the end of our walk, four kids I had never seen before ran towards me and jumped in my arms. They were hugging my legs so much I couldn’t move anymore. I was completely gobsmacked and touched by this wave of affection. I managed to grab their hands and make them walk, lifting them up in the air at times. We were giggling our hearts out. We raced back together to the temple and waved the kids goodbye with a grin on our faces.

During the morning break, the younger monks played at throwing rocks in a small hole in the concrete ground of the courtyard, while the older monks chatted and laughed. Our snacks consisted of tea (often tasting more like sweet milk) and sometimes cookies for all. (Fruits were too expensive and could only be afforded when foreigners made a donation.)

The morning break coming to an end, the bell sent the monks back to their Tibetan, English, Nepali, science, maths, philosophy or prayer studies.

At lunch, us volunteers sat outside on the lawn to soak up the sun and feast on vegetable curries – and the rare piece of fruit. A couple of the older monks joined us; some of the more social younger kids (always the naughty ones!) hovered around us, looking for a play or a hug.

With lunch over and the full water reserve heated up by the midday sun, it was time for the kids to shower. Volunteers and older monks brought out the soaps, creams and towels, ready to help scrub, moisturise and dry away. As the bunch of playful young monks undressed in the sunny courtyard and ran bare-skinned to the dorms’ showers, I realised that hiding underneath these robes were simply kids looking for care and fun.

With an hour to kill before my next class, I sat on the grass with 25-year old Lekshey, one of the older monks at Pema Ts’al. He told me of the internal struggles he lives as a monk, away from his mum. I’ll share his story with you in the next few days…

After dinner, the small medical clinic (taken care by volunteers willing to deal with everything and anything: chicken pox, stomach problems and even small cuts that turn into serious infections due to poor hygiene) was open for routine checks and teeth brushing.

Just before bedtime, I read the kids a children storybook I had brought from Australia, which an older monk translated in Tibetan for me. Twenty-odd of them cuddled on two single beds, listening and giggling, before being tucked in their beds and kissed good night.

As the lights went off over Pema Ts’al, the sky came to life with thousands of luminescent stars… stars for everyone to wish upon…

(For more photos of my time in Nepal, check out my Flickr page.)

Visit my other blog